Home Blog Over The Yardarm: Treadwell Versus The Volcano

Over The Yardarm: Treadwell Versus The Volcano

Tenny had to go and mention the volcano trek in St Kitts the last time he had a lovely chin-wag with you, didn’t he? He just couldn’t not mention that, could he?

He knows it’s a sore spot, not just because we were nearly catatonic – my least favourite kind of tonic, I may add – the next day, with pools of lactic acid eating away at muscles we barely knew we had, but also because it was the single most humiliating shore excursion I have ever been forced to endure.

We hadn’t known about the opportunity to climb a volcano when we boarded Celebrity Eclipse out of Fort Lauderdale, Florida, but we were at a loose end when the ship reached port in Basseterre, St Kitts, so we popped down to the excursion desk and enquired about the day’s possibilities.

“Take the volcano trek up Mount Liamuiga” the perky girl behind the counter said. “I just did it a month ago and it was fabulous. You’ll just love it. I know you will.”

I gave Tenny a sceptical side-eye. “It sounds like work,” I began, but she cut me off.

“But your brochure lists it as ‘strenuous’,” I waved the document her way.

“We just say that so 80-year-olds don’t take it. I promise you can do it.” She beamed at me, but I would have sworn there were dollar signs in her pupils.

Tenny was nearly salivating at the idea of an easy jog up an angry mountain filled with lava, so I played my final get-out-of-jail-free card. “I don’t own shorts. Can I do the trek in a dress?”

Two hours later our tour bus pulled into a gravel parking area at the foot of Mt Liamuiga and a horde of adventure-seekers – plus us – scurried out and began the climb. I was the only woman not dressed in moisture-wicking gym wear, but my sundress was as long as most women’s shorts, with the added benefit that it acted like air-conditioning with every light breeze.

I ignored the tour guide when he asked, “You gonna wear that, Miss?” and trotted along the path to join Tenny, who simply could not wait for his 1,800 foot trek to the volcano’s Sulphur-belching crater to begin.

Fifteen minutes into the steep uphill climb through jungle-like terrain, I realized there was no breeze. Half an hour into it every single person in front of me knew far more about me than Tenny knew prior to our wedding night.

The road straight to hell – no longer could I call it a ‘path up the volcano’ – forced me to lift my knees as high as my chin in an effort to scramble over fallen trees and boulders the size of Landrovers, and with every humiliation my skirt lifted and revealed my knickers. And not the pretty, lacy ones either. These were (thankfully, in some ways, agonizingly in others) industrial wear; the sort of knickers a woman only wears when she knows perspiration (and not the pleasant kind) may be involved.

At the 45 minute point the rest of the group was long out of sight, and I was free to swear like a trooper at every step. The tour guide who brought up the rear as we climbed lingered a respectful distance ahead, just out of earshot, likely having pegged me as a straggler right from the start.

I heard stones crunching behind me and realized I was not alone in my agony, which I considered a blessing. If I’m going to suffer I prefer to have at least one other person to suffer with me and, ideally, to join me in spitting slander at everyone around us who does not share in our pain.

A woman from Wisconsin struggled along, staggering like a drunken sailor as she fell bodily over tree roots and sank her brand new trainers in mud holes, not even trying to hide her complete ineptitude. When we stopped to catch our breath, she told me she’d been training for weeks in anticipation of the climb. It had been a lifelong dream, she said, tears welling up as failure wrapped itself around her, heavy and wet in the jungle humidity.

“I’m just going to turn back,” I told the guide, eager to end the torture.

I looked at Miss Wisconsin. To my great dismay she insisted we continue, but the volcano gods smiled upon me and bloodied her knee at the next tree root, and she agreed the time had come to bow to the will of fate. Just as we turned back, Tenny, who had gone ahead in the initial rush, shouted a greeting from up the path and I endured one more scramble over a boulder to meet him.

He gaped at me, aghast. “Treadwell, old girl, mind the knickers!”

“Knickers?” I hissed. “Who gives a monkey’s about the damned knickers? I’ve broken a nail!”

As we made our way back down the path he claimed he had turned around just short of the crater, ever the thoughtful husband with my safety his only concern, but I knew in my heart the volcano had beaten him, too. Just not as badly as it had beaten me.

We rested in the shade of a palm tree near the bus, and it was a happy group that trotted merrily toward us, giving each other high-fives and lying viciously about how much “fun” they had had, and I silently cursed their joyful success. To his credit, the guide never once mentioned unmentionables or armpit stains on the drive back to the ship, and while I knew I had failed in every way possible, I was grateful to him for treating me as if I’d almost – almost – made it.

Tenny and I soothed our pains in the in the Ensemble Lounge, as we licked our wounds with drinks in hand, and with the sincerity with which we had taken our nuptial vows we promised never, ever to venture into ‘strenuous’ again.

Tell me I’m not alone, darlings! What was your worst or most humiliating shore excursion? Answers in the Comments!

2 Responses to Over The Yardarm: Treadwell Versus The Volcano 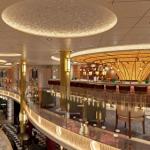