Home Blog Over The Yardarm: When Ships Still Looked Like Ships 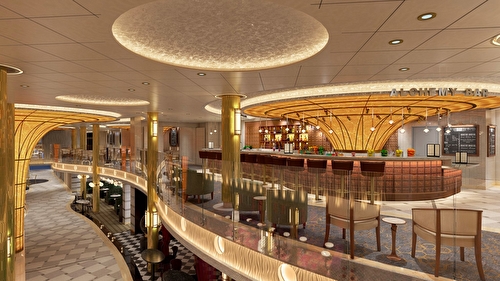 Over The Yardarm: When Ships Still Looked Like Ships

Fed up with the election yet? Yes, we thought so. If we hear a politician start the phrase “I believe in…” one more time while speaking with all the energy of a dead AA battery, we will run screaming from the house.

Yes, we all know Theresa May is an “unelected leader,” but we don’t need to hear it every 30 seconds. We all know Jeremy Corbyn makes a AA battery seem like the life and soul of the party. And we all know that Boris Johnson is an out-of-control wig on steroids. And what the hell is a mugwump, anyway? Can’t they even come up with some decent insults? You might just as well call someone a wurdling old splod-cobbler (thank you, Rambling Syd Rumpo).

So, if you’re totally hacked off with the whole idea of scribbling an X next to the politician of your choice (if only we could X them off the face of the earth), let us whisk you away to a different time and place and talk about ships; really nice, old-fashioned ships. In fact, ships that still looked like ships.

Looking at the photos that came out last week of the new Norwegian Joy (which is headed for the Chinese market – and good luck to them!) – we were again left with the distinct impression that modern ship designers are a completely different breed who never have to see the end product of all their computer-aided machinations. They just sit in a dark office somewhere and try to one up each other with their eccentric creations.

That’s the only way you can explain vessels like the uber-garish Carnival Horizon (due out next year), with its multi-coloured superstructure that looks like it has been put together by a three-year-old with a Lego Duplo kit. Blindfolded.

You don’t have to go far back in time, though, to find great examples of maritime architecture, when proportions were modest, gimmicks were non-existent and ships were more, well, ship-like. You can even use the same name in this instance, the MV Horizon.

This vessel of Celebrity Cruises was a real trail-blazer for her time. Launched in 1989 from the same Meyer Werft shipyard that just delivered Norwegian Joy (and the Horizon would fit inside her almost four times!), the Celebrity newcomer marked the first new-build for the Chandris-owned company that had made a speciality out of re-cycling old ocean liners from the 1930s, 40s and 50s.

At a time when only Carnival and Royal Caribbean were building new ships, the Horizon was a real breath of fresh air, a sleek, 46,000-tonner with a raked funnel, eye-pleasing lines and a blue-and-white livery that looked equally at home in the Caribbean as the Mediterranean.

There were no balcony cabins, no alternative restaurants, no multi-storey atriums and certainly no water-slides, rock-climbing walls or – god forbid – ziplines. In our day, ziplines were what you got when you wore your trousers too tight, but we digress.

The interior design, by Greece’s Michael Katsourakis and Glasgow’s John McNeece (a man who was elegance personified), was beautifully under-stated yet graceful, and it nodded pleasingly to the vessels of yesteryear while having modern affectations in the shape of its extensive spa and shopping gallery.

Amazingly, it was the largest-ever cruise ship built in Germany at the time, and it set both Celebrity (who were later bought by Royal Caribbean) and Meyer Werft on the fast-track to fame and fortune.

Alas, that the designers of today don’t pay more attention to the designs of yesteryear, and the aesthetics involved in maritime architecture. And it was only 27 years ago! Admittedly, that was still before the internet, smartphones and Netflix, all of which are major benefits to modern life. We’re certainly not anti-technology and life-improving developments, but you can definitely over-egg the pudding, and most new ships are not only over-egged but distinctly pudding-like. You know, large, heavy and a major cause of indigestion.

The Horizon and sister ship Zenith (in 1992) were almost the last of their breed, well-proportioned and sensible examples of sea-going fabrication, with no pretensions to be anything other than what they were, and no gimmicks in sight.

When Celebrity introduced the Century-class trio of ships from 1995-97, the genie was out of the bottle in the cruise world and 46,000 tons was deemed distinctly undersized. Carnival and Princess both had plans for 100,000-tonners, and Royal Caribbean wasn’t far behind. Cunard, Norwegian Cruise Line, P&O, Costa, Disney, Celebrity and MSC Cruises have all subsequently passed that mark, and things have only become more garishly over-sized ever since.

And then they really go and rankle our rigging by trying to claim these monstrosities as “luxurious” when they simply mean “feature-packed.” Call us old-fashioned, but there’s nothing luxury-like about go-karts, 10-pin bowling and ice-skating rinks. They might be fun, but they certainly wouldn’t attract those with a well-honed sense of the good things in life.

So, when it comes down to it, just as much as our politicians drive us up the wall with their inanity, so modern ships are nothing less than visual foolishness. But at least they go places. And they don’t use words like mugwump.