“For this renovation, we want to rethink and reshape the interior space of our emblematic flagship”, Charles Gravatte, General Secretary of Ponant, revealed.

“The ship’s transformation is part of Ponant’s general upscaling strategy and aims to pursue the increase of our standards of excellence to the highest level. We are pleased and confident in the expertise of the San Giorgia del Porto shipyard for this major project.”

With a 32-guest capacity and a staff-to-guest ratio of 1:1, Le Ponant guarantees first-class service during an unrivalled, personalised sailing experience.

The all-new 16 staterooms and suites offer more space and benefit from large windows or individual balconies, giving guests a sense of being on their own private yacht.

In Le Diamant, guests will enjoy looking out onto the horizon while indulging in fine gastronomic cuisine made from local ingredients.

The wellness area offers massages and Biologique Recherche treatments, and yoga sessions are offered daily on the Sun Deck.

Le Ponant is purpose-built for exploring the world’s most beautiful tropical regions and, as such, is equipped with two standard kayaks, two glass-bottomed kayaks, four stand-up paddleboards and snorkelling and scuba diving equipment.

Le Ponant is due to re-launch this month, with the first of three 7-night Dubrovnik roundtrips departing on 7 August. She will make her way down the Dalmatian coast, through the Bay of Kotor and then to the Adriatic islands of Mljet, Korčula, Vis, Hvar, Brač, Šipan and Lopud. Activities include wine tastings, traditional sword dance performances and diving excursions to World War II shipwrecks.

In the winter, she will embark on a series of 9-night Seychelle voyages, which include two new ports of call: the African Banks and Thérèse Island – both uninhabited and only accessible during the day.

Throughout 2023, she will operate 26 cruises along the Kimberley in Australia, with guests benefitting from an exclusive partnership between Ponant and Paspaley, one of the few companies that still dives for wild pearl oysters.

Reservations for the 14 August and 21 August Dubrovnik roundtrips are still open. However, availability is limited, so to reserve your place, please call our Voyage Consultants on 0800 008 667 or submit an online enquiry form via our website. 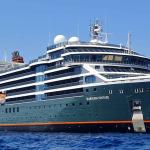