Life Is Golden with Tradewind Voyages

I was fortunate to be one of the first guests to sail aboard Tradewind Voyages flagship vessel, Golden Horizon. Across two days – both at sea – I had ample time to find out why this emerging operator has captured the imagination of many cruisers looking for a new way to explore the high seas.

Having caught nearly everyone by surprise, Tradewind Voyages made waves in autumn 2020 when they signalled their intention to provide guests with a unique cruise experience whereby the line’s ship, Golden Horizon, would ‘follow the sun’ across the world. Offering an array of exotic sailings, and a full navigation of the Maritime Silk Route, it all seemed a desirable proposition, after all; what could be better than discovering the likes of the Indian Ocean and Australia aboard the ‘World’s Largest Square-rigged Sailing Vessel’?

However, the disruption caused by the global pandemic soon put paid to Golden Horizon’s tropically-themed maiden season. With no option but to keep the ship in the northern hemisphere, Tradewind Voyages pushed ahead with a different type of launch. They designed a series of itineraries exploring the British Isles and a handful of European destinations such as Denmark and the Norwegian Fjords. Unfortunately, the ever-changing regulations and safety guidelines meant that even these itineraries required alterations, including Golden Horizon’s inaugural sailing.

The itineraries were quickly rejigged, and the invite for the new new inaugural sailing hit my inbox and was quickly accepted. The Cruise Line team has been working hard to spread the word about Tradewind Voyages, so the chance to get on board and experience Golden Horizon was an opportunity too good to pass up.

Embarkation was in Portland, so an early start was required to reach the south coast ahead of time. With the trains miraculously running as scheduled, I arrived in Weymouth just before midday and jumped in a taxi for the short trip down to the port.

As we emerged from Weymouth’s midmorning traffic and headed south parallel to Chesil Beach, I caught my first glimpse of Golden Horizon. Having only seen a few early pictures of the ship, I was immediately struck by her size and the eye-catching sight of her masts jutting into the blue sky.

Following a slight hold up while the staff checked guests for the mandatory PCR test results and other documentation, I finally made my way up the gangway and stepped foot on Golden Horizon for the first time. Greeted with a smile, I was led to the Guest Services to check-in and pick up the card for my cabin.

I had been allocated a Deluxe Cabin (#527) for the duration of the sailing. As I was positioned midship on the main deck, I had easy access to Golden Horizon’s facilities, including the main dining room directly below. However, with the ship’s layout – and with just 140 cabins and suites onboard – you’re never too far from where you need to be. 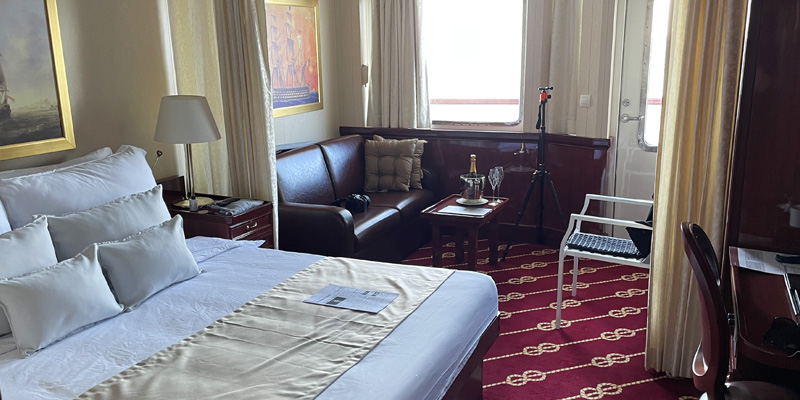 In terms of amenities, the cabin offered everything I required for my stay. In keeping with the higher accommodation categories on Golden Horizon, I had ample space and a private balcony, which would later present some fantastic views as the ship cut through the deep blue waters of the British coastline.

The ensuite bathroom facilities were pleasantly decorated and more than adequate. However, a delay from the suppliers meant the complimentary shampoos and shower gels were not of the premium variety Tradewind Voyages would usually supply. Despite this, I wasn’t going to complain – you can always forgive a new operator a few teething problems, even more so in these unprecedented times.

Over the next two days, I was afforded a taste of what sailing aboard Golden Horizon is all about. The atmosphere is completely relaxed and informal. Even though this was a work trip, it felt like a ‘proper’ holiday and that was largely due to the atmosphere on board. For a ship that’s ‘small’ compared to some of the larger vessels available, Golden Horizon still offers more than enough ways to pass the time.

Here are a few of the aspects of Golden Horizon that stood out during my voyage:

The centrepiece of Golden Horizon is the main restaurant. Spread across two decks and topped off with an elegant Piano Bar, it’s a three-storey masterpiece with instant wow-factor. The Piano Bar itself is also pretty special – it was only a short stroll from my cabin, and the feeling of relaxing with a drink and taking in views across the sea was unbeatable.

On the main deck is the Horizon Bar, which is where I enjoyed lunch and was the central meeting place for pre-dinner drinks. The ship’s library is well hidden at the back of the vessel, and it’s perfect for a spot of quiet time – or to get inspiration for your excursions, which you can book by visiting the nearby Guest Services. For morning coffees and late-night drinks, there is an intimate bar on the Gallery Deck called Debeljaks.

One of the more curious aspects of Golden Horizon is the pools. The ship’s main pool is much larger than those I have seen on bigger cruise ships, and that’s without factoring in the TWO dive pools and the marina. Water sports appear to be a significant part of the Golden Horizon experience, so make sure you bring your trunks or costume. Of course, if you’re not inclined to partake, the Pool Bar provides a leisurely space in which to enjoy the sun with your favourite tipple.

The food served on Golden Horizon is superb. My first dining experience onboard was delightful – a Parma Ham/cherry tomato starter, followed by Sea Bass. I am a big fan of Sea Bass, and in comparison to that which I have experienced on other ships, it was probably the best Sea Bass I’ve ever had.

During the evening meal, I spent time talking to the other guests – they raved about the Beef Wellington and said it was sublime. Unfortunately, I wasn’t able to hang around for dessert (a trio chocolate mousse) as it was time to head up on deck for a magnificent sailaway party.

The second night of the trip introduced a complete menu change, so I decided on the Beef Carpaccio, followed by Duck a L’Orange. Both dishes were close to culinary perfection, presented beautifully and tasted amazing. Again, as was the case on the first night, the feedback from my fellow guests was overwhelmingly positive. 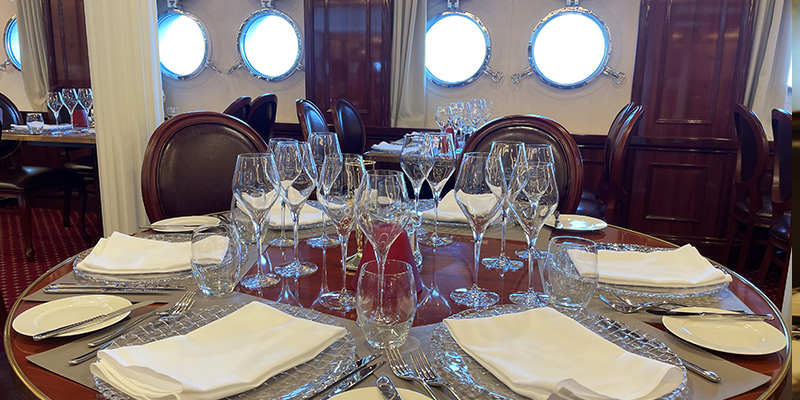 The service on Golden Horizon is excellent. You could sense the relief amongst the crew, delighted to finally be able to put all the training and waiting to good use. At every turn, I encountered friendly faces and kind greetings. During mealtimes, the service was equally impressive, with the staff ensuring all allergies were accounted for and that our courses were delivered to the table promptly.

(I’d like to make a special mention for cabin attendants, who were forced to put up with all my recording equipment – they did an amazing job, and nothing was ever too much trouble!)

With my short trip ending in Dover, I had plenty of time on the train home to contemplate my time onboard Golden Horizon. As mentioned earlier, we’d been early adopters of Tradewind Voyages and are eager to see a new operator hit the waves and add a bit of disruption to a marketplace where too often ‘big’ can be misconstrued as ‘better’. Sure, you won’t find Broadway-style shows or glitzy entertainment lounges with video walls, but that’s never really been the point.

Instead, Tradewind Voyages offer a unique opportunity to indulge in the timeless romance of being at sea. Golden Horizon is modelled on a 20th-century clipper (France II), so understandably, the attention to detail throughout is breathtaking. Nods to maritime traditions rub seamlessly combine with contemporary flourishes and provide an onboard environment that exudes heritage yet provides the ideal surroundings for an unforgettable holiday at sea without being stuffy or overly formal. 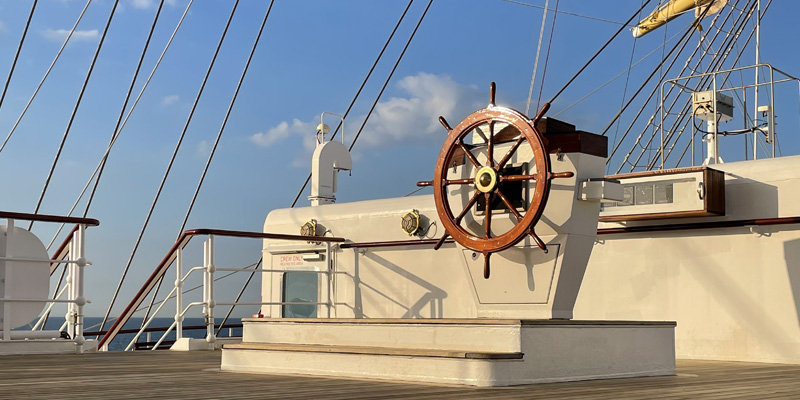 Now back home, I find myself drifting back to my time onboard. Easy, stress-free days and peaceful nights spent nodding off to the gentle motion of the ocean. I can only imagine how it would feel to be journeying coastal Indonesia or Africa; sun shining, sails unfurled, and nothing but the sound of lapping waves, clinking glasses and genial chit chat…it all sounds rather golden to me.

Are you interested in sailing with Tradewind Voyages? Let us know in the comments below.

One Response to Life Is Golden with Tradewind Voyages 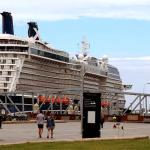