Home Blog How About A ‘Virtual Cruise’?

How About A ‘Virtual Cruise’?

HOW ABOUT A ‘VIRTUAL CRUISE’?

It is a slow week at T&T Towers this week. We’re into the dog days of summer (not that you’d know that from the weather, of course; it’s been wetter than a Lib Dems press conference about the Arts), which is usually the cue for us to take to the sea. Any sea.

Sadly, not this summer. We’re land-bound for the time being, and not enjoying it a bit. That means we are reduced to opening the sherry at the end of the day and poring over old brochures, wistfully eyeing itineraries far and wide that have caught our attention for some time, and which will have to stay on the back-burner for a while. This winter, who knows?

Therefore, anything marked ‘cruise travel’ that arrives through our Letter Box is going to catch our attention in the same way the summer recess appeals to the current government – an instant escape.

“First Anniversary,” the missive said. “A celebration of the most luxurious ship ever built,” it insisted. Now, we can agree on the first part. An anniversary is never to be sniffed at. We have certainly celebrated a few of those in our time (dancing and table tops may also have figured). In fact, we probably pay more attention to anniversaries than we do birthdays. An anniversary is usually something out of choice; a birthday, not so bloody much (and there are way too many of those for comfort these days).

The second part of the statement was a clear misnomer, however. Unless they were talking about the SS Normandie – and they weren’t – anything that followed was going to be sheer perfidy. It comes back to what we said a few months ago that the word ‘luxury’ is the most bally over-used expression in the cruise lexicon. To therefore try to claim that anything could surpass the sheer unabashed opulence and sumptuous style of the 1930s cruise liner of French extraction is a folly of the highest order. Cruise historians are unanimous on that point – and so are we.

However, in this instance we were prepared to allow the originator of this uncouth claim some leeway in explaining their position. The ship in question most certainly wasn’t the Normandie, or even any similar maritime paragon, but it was one we had seen at an adjoining berth in Monte Carlo last year, and it had certainly caught our attention.

Regent’s Seven Seas Explorer had caused a genuine ripple or two of murmured appreciation on its debut 12 months ago. The clean, well-proportioned lines give it the look of an admirable sea-going vessel; it doesn’t have the monolithic outward appearance of many of its modern brethren; and there are none of those ghastly gimmicks and other attention-seeking monstrosities with which other vessels are festooned these days.

The Atrium on Seven Seas Explorer

So, naturally, we were intrigued to hear more about it. “A new standard for luxury cruising,” they trilled. “Seven Seas Explorer has exceeded every expectation, thanks to each and every member of the exceptional staff and crew,” they said. Poppycock, we said to each other by way of reply. Poppycock and balderdash, in fact. Just so much sea-going hogwash. The ‘standard’ was set in 1935, and, as for expectations, to try to claim that every single passenger has had their expectancy level raised beyond 100 per cent is public relations blathering of the worst kind. Pure shameful shilling.

But we were prepared to look past that, too. Because the next sentence really grabbed our nautical curiosity. “To mark the ship’s first anniversary, Regent Seven Seas Cruises has launched a new 360-degree Virtual Tour series on the line’s website.” Should we, we thought. Can we, we contemplated. And, yes, we jolly well did.

And, you know what? They might just not be as guilty of outright hyperbole as we first thought. The immediate impressions of shimmering glamour and extravagant decadence were hard to shake. This is a ship that positively glistens with super-abundant promise; an exemplar of sea-going style.

Okay, so it’s only a ‘virtual’ look, and the Seven Seas Explorer’s tour currently includes only Decks 4 and 5, but there is certainly enough on view to pique the interest of even the most jaded traveller. We especially enjoyed the elegant razzle dazzle of the two-storey Atrium, a space of bijoux beauty, and the ultimate answer to all those designers who believe a modern atrium should be 11 decks high and full of neon eyesores.

Light fittings glitter with a sense of proportion and style, as opposed to searing the eyeballs out of every visitor, and the main dining room is a tour de force of colour as a subtle symphony. Don’t believe us? Go online and check it out for yourselves.

As something of a potent afterthought, a powerful PS, Regent added that there is a separate link for taking a virtual vista of the ship’s suites, It doesn’t quite grab you with the same sense of graphic magnificence, but the effect is similar. This is a ship you really want to spend some time on.

Finally, there are three separate virtual tours of the alternative dining restaurants, Chartreuse, Prime 7 and Pacific Rim. Regent’s cuisine has long been a major facet of their cruise-going experience (pretty much since they were inaugurated as Radisson Seven Seas Cruises in the dim and distant past of 1990), but Seven Seas Explorer most certainly (ahem) pushes the boat out in terms of chromatic impact. The colour palettes in all three are exquisite, but take a cyber-stroll into Pacific Rim and we promise you a feast for the visual senses. We mean it. Go and do it. Now.

In the meantime, we need to call up our nearest licensed victualler. We’re out of damned sherry again.

The “Most Luxurious Ship Ever Built” – Seven Seas Explorer 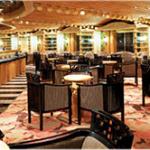