Oscar Wilde said it best. “If you are not too long, I will wait here for you all my life.” But it was also paraphrased by that well-known author Anon, who insisted simply, “Good things come to those who wait.”

But, whether we are prepared to wait or not, the simple fact is that the luxury cruise boat is sailing more frequently than ever, and that is most certainly A Good Thing.

Wilde was probably more in touch with modern (impatient) sensibilities when he coined his phrase but, in the 19th century, there wasn’t a huge amount of choice for five-star sea-going voyages, hence he would have had a pretty long wait.

Today, the maritime landscape is one of ever-changing splendours, especially in the area to which we are most allied, that of ships which afford an extra sense of style and class, the je ne sais quoi of cruising (or, as the cockney version has it, “Yer say what?”).

It’s all very well building 200,000-ton monoliths and filling them full of every known gadget and gimmick known to man, but who wants to be part of Las Vegas-on-Sea, or even Torremolinos Sur Mer, come to that?

Especially when the opportunities for taking the high (quality) road have never been greater (I was going to say ‘take the road less travelled,’ but that would be most inaccurate in the circumstances). This is a new Golden Age for superior nautical navigating, the likes of which have probably never been seen before.

That difference in both ends of the cruise scale was graphically illustrated in the space of just a few hours this week, and the contrast couldn’t have been starker, notably for those who mis-equate glitz with glamour.

On one hand, we had a report that sales for luxury travel in 2017 are up by as much as 35 per cent with some travel agents, a fairly massive jump by any standards, but particularly surprising given the parlous political state on both sides of the Atlantic (perhaps people have simply decided that, hang it all, they will spend it while they can as there may not be much of a ‘tomorrow’ to save anything for, given the increasing lunacy emanating from the White House and the ranks of the Brexiteers).

It could just be, however, that purveyors of genuine opulence in the travel world are being seen for that they truly are, i.e. the bastions of true value and comfort. More simply put, if you want an authentic travel experience, it’s not going to be found with 6,000 other similarly-minded souls at the same time.

Then, hot on the heels of this singular revelation from the travel headlines, we had a photograph of the top deck of the forthcoming Norwegian Bliss of Norwegian Cruise Line (due to hit the waves in November 2018; the ship that is, not the top deck).

“Is it April the first?” Treadwell enquired over my shoulder. “That’s not for real, surely?” But, yes, I explained, it was most certainly a legitimate illustration. “But what IS it?” she tried again. A go-kart track, I informed her. A big one. “On a SHIP?” And she added what I thought was “Whatagodawfulmonstrosity,” but it turned out she had merely choked on her cocktail olive.

Fortunately, she rallied valiantly from her near kalamata calamity, and demanded with equal parts scorn and incredulity, “Who would want to sail on THAT? And how on earth would they top up their tan with a blasted great bumper-car track blocking the sun?”

She had a point, even she hadn’t quite grasped the idea. The last time I was anywhere near a go-kart track (Bournemouth, I think, sometime in the 70s), the noise was akin to standing at the end of Gatwick Airport’s main runway with a continuous stream of take-offs passing overhead. Relaxing it most certainly was not. But Norwegian were breathless about the possibilities. “Longest track at sea,” they gushed; “put pedal to the metal on a two-level track,” they insisted; and “speeds up to 30mph, with turbo-boost available,” they concluded.

Turbo-bloody-boost? On a cruise ship? At sea? Pass the olives, old girl, I’m about to join you in your flabbergastedness.

Now, I know we often come across as cruise-going curmudgeons, but can anyone realistically say that one of the prime attractions of going to sea is to go racing at up to 30pmh, overdrive or not? Not only can you immediately picture go-karts flinging themselves off the top deck of the ship, turbo-boosting all over the place, the sheer noise and inanity of it all would drive most passengers to jump off themselves if the karts didn’t.

But it is a fair question. Who really wants to go to sea with a go-kart track (and a laser-tag course, and a free-fall slide, and a ‘Splash Academy’)? Is that really why anyone would take a cruise? If you wanted to go kart racing, wouldn’t you do it somewhere on land that has a proper track, unconstricted by the immediate danger of flying into the briny? Thanks, but we’ll pay extra NOT to have go-karts anywhere in the vicinity of our peripatetic holiday.

Happily, we now know, thanks to the ‘other’ headline in the travel news, that indulgent, dignified travel, the kind we cherish most of all, is alive and well. They can build as many vessels as they want and pack them with interactive gewgaws, and we will still have plenty of alternatives, both sea-going and river-borne.

And that, truly is what the luxury gap is all about. Or, as Wilde also said, “Anyone who lives within their means suffers from a lack of imagination.” 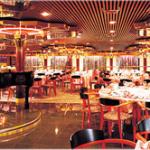