Sir Richard Branson has pioneered many successful launches in his time as the founder and driving force behind the Virgin brand. It’s been an iconic name in business since 1970. And it’s a fitting moment that the company is celebrating its 50th anniversary this month at the same time as they are preparing for a launch of a different but more literal kind, that of Virgin Voyages.

Sir Richard’s entry into the cruise world has been a typically noisy and gung-ho one since it was first announced in December 2014. There is no tip-toeing around with any Virgin brand – it goes full throttle from Minute One of its existence and it expects to carry all before it.

That no-holds-barred attitude has generally served the company well over the years, most notably with his start-up record label and Virgin Atlantic Airways, but it has also had its share of, dare we say, not hits. Does anyone remember Virgin Cars? Probably not, because it shut down within five years. Likewise, Virgin Cola. Virgin Digital (an attempt to take on iTunes) lasted barely two years.

That means not everything this jovial business guru touches turns to gold, and he is often more successful as an innovator and trendsetter than as a copycat imitator trying to refine an existing idea.

Which brings us back to Virgin Voyages. In addition to the Virgin Group’s 50th business year, this month also marks the debut of first ship of the fleet, Scarlet Lady. This eye-catching, 110,000-ton vessel left the Fincantieri shipyard in Genoa for sea trials on February 14, and the countdown is now most definitely on until her first fare-paying cruise on March 26.

She has been three years in the making and, if even half of what Sir Richard has promised in the lead-up to her launch is true, this Lady will be a veritable siren of the seas

But there is more to it than that. Much more. You never like to say anything with Branson’s backing is a gamble, but you suspect he would be a pretty good poker player. And, in this instance he has a fair amount at stake.

True, much of the actual $3billion start-up cost has been borne by American investment firm Bain Capital, but it is Branson’s face at every press conference and media event in the establishment of the company, and Virgin’s own outlays in marketing, construction and staffing have already been considerable.

Typically, Sir Richard has not been shy in insisting Virgin Voyages will enter the market as a “disruptor,” aiming to shake up the cruising status quo. Back in 2018, he insisted: “I never want to go into a business unless we are going to radically alter it and radically create something that everybody who works for Virgin and everybody who comes into contact with Virgin is going to feel really proud of.”

OK, calling passengers ‘sailors’ is a slightly novel approach, but we doubt he’ll sell a single ticket on that basis alone. No, there needs to be real substance behind the clever marketing spiel, otherwise, ‘radical’ or not, people won’t shell out their hard-earned cash for a holiday without proper appeal.

And here’s where some of the doubts creep in. Among the “disruptive” features of Virgin Voyages are the following:

It’s an adults-only ship. No under-18s will be allowed.

But this is nothing new. Saga has been operating cruises for grown-ups since 1996, while that no-kids-allowed policy has been the case with Viking Cruises since they began in 2014. Family-friendly P&O Cruises actually has two ships that exclude children entirely. There are also several lines that “accept children” but don’t provide any facilities for them and, as a result, are still largely child-free. These include Oceania, Seabourn, SeaDream, Silversea and Azamara Club Cruises.

There will be no buffets, just a choice of 20 restaurants with no supplement.

To start with, who needs 20 dining venues on a week’s cruise? And the likes of Norwegian Cruise Line have already beaten Virgin to the punch here with their Freestyle dining system, while Royal Caribbean’s mammoth Symphony of the Seas boasts 10 complimentary restaurants. Yes, one of those IS a buffet option, but you could easily go all week without needing it. There are also another 10 for a small surcharge. Virgin’s dining is going to have to be pretty startling to make this a major selling point.

No gratuities. At all.

This is genuinely a nice touch from a mainstream cruise line. But it’s not new. Each of Azamara, Crystal, Paul Gauguin, Regent, Silversea and Seabourn include gratuities in their fare, and most don’t charge for drinks, either. Does Virgin still sound like a ‘disruptor’?

Virgin will be environmentally friendly.

As far as that’s possible for a cruise line. Banning single-use plastics and other eco-friendly touches are ALWAYS to be applauded but, once again, Virgin will be late to the party. Norwegian has already gone down this route, while at least another 14 have done away with plastic straws, and lines like Hurtigruten, Lindblad Expeditions and Scenic Cruises have built ships with new, sustainable technology.

Other Virgin features, such as their own private island in the Bahamas, are also far from novel in the cruise world while having the first tattoo parlour at sea also isn’t exactly the kind of thing to have people queued up at the gangway.

Their price point isn’t a huge draw, either. A 7-day cruise from Miami in an entry-level balcony cabin (sorry, “sea terrace”) on Virgin will cost a fairly hefty $2,608/person. But, for that price, you could get a Penthouse Verandah stateroom on Crystal Cruises, and enjoy true ultra-luxe cruising.

Virgin do insist, however, that their appeal will be primarily to new cruisers, so it’s possible there won’t be a lot of direct comparison work done by their ‘sailors.’ And the bottom line becomes, is the lure of the Virgin brand sufficient, on both sides of the Atlantic, to fill 2,800 berths on a standard Caribbean cruise – even including Bimini Beach Club – every week?

And that is the unknown question as we head towards a Virgin berth (ahem) next month. It is an intriguing prospect because you can be sure Branson will pull out all the stops to make it an appealing prospect, but it’s going to take several years – and a lot of positive publicity – before we know if ‘Voyages’ has been able to disrupt the traditional idea of cruising.

What are your thoughts on the new Virgin cruise brand, and are you interested in sailing with them? Give us your opinion in the Comments section below.

2 Responses to Can Branson Make Virgin Voyages A Success? 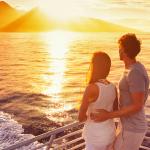