Home Blog A Plague On Both Your Harbours!

A Plague On Both Your Harbours!

A Plague On Both Your Harbours!

Yorkshire had the right phrase for it, several eons ago. It doesn’t hold up quite so well in this day and age, but it is still worth repeating when you read something so mind-bogglingly stupid that you have to re-read it, several times, to make sure it isn’t you being particularly obtuse.

The saying in question, of course, is “There’s nowt so queer as folk.”

It has that special, pithy ring that only dyed-in-the-wool Yorkshire-folk can pull off, with the air of being totally dismissive at the same time as being face-palmingly obvious.

You know, as in, “That Trump fellow. Is he deranged or what?” We hear it again and again on our travels when we’re mistaken for citizens of the poor, put-upon US of A (actually, it more takes the form of “Trump? Bwahahahahaha!” but that’s beside the point).

The Yorkshire version has its own merits, though, especially when we encounter something genuinely from the X-Files, where X stands for “You must be xxxxxxxx joking!”

In this instance, it came from a casual perusal of the American version of the standard daily news-sheet that some cruise lines – bless them! – still issue in this day of internet, smart phones and 24-hour TV news.

Okay, you’ve definitely got us at cruise-ship captain. By the time you add in “plague-afflicted” and somewhere exotic like Madagascar, we are truly agog.

To our mind, purely reading the headline, you would imagine things could only turn ugly if a ship actually called in to an island smitten with the plague. There’s nothing that will put a crimp in your voyage like an outbreak of the Black Death or Smallpox.

Therefore, you’d think it was probably A Good Thing if your captain decided that, just this time, it was distinctly wiser to give Plague Island a miss.

Not so if you were on the Costa Cruises’ Indian Ocean jaunt from the island of Reunion to Madagascar last month. In fact, it is not so much a case for the X-Files as one for the ‘You Couldn’t Make It Up’ section.

Consider. According to the Washington Post story (and a more authoritative source is hard to find these days), several passengers aboard the “luxury cruise ship” neoRiviera were seriously upset when the ship didn’t call in at Madagascar as scheduled because of an outbreak of pneumonic plague that had killed more than 100 people.

Okay, we take it back, slightly, about the authoritative bit. Repeat after us: “luxury cruise ship” is the most over-used phrase in the media lexicon, and the Post is way off beam here. Costa Cruises can be many things, including a great value cruise experience, bit it is never, ever, a “luxury” cruise. But we digress.

Back on board neoRiviera, the small group of malcontents wasn’t taking the decision to deny them a possible dose of pneumonic plague very well. They staged a protest. They called the decision to avoid Madagascar (and three ports of call in the week-long voyage) a “scam.” They staged a second protest as the ship pulled into port in the Seychelles.

The ring-leader of the protests was promptly escorted off the ship and flown back to Reunion (at Costa’s expense, it should be noted), whereupon he promptly told the newspaper the ship had been “a floating prison,” and that passengers had been “treated like cattle.”

Memo to said ring-leader – an actual floating prison would be notable for not being able to move at all, very much like the Vernon C Bain Correctional Center that bobs around off Long Island Sound in New York, and houses some seriously unpleasant inmates. And, if you had been treated like actual cattle, you would have been eating nothing but grass or corn for the duration of the cruise. So, there’s that.

You can almost be sure that there is a lawsuit pending from the offended ring-leader (or, perhaps, one of his fellow dissenters). You can hear it already:

“Yes, m’lord, the plaintiff is asking for massive compensation due to being brutally and inexplicably denied the opportunity to sample a rare disease for himself, and share it with all the other passengers aboard the aforementioned vessel. It was discrimination of the worst kind: disease-ism.”

But, as ridiculous as it sounds, the story does serve to underline a salient point about cruises (and no, not the one that says you are almost certain on any voyage to be at sea with someone who is, in all likelihood, as mad as a box of frogs).

The whole idea of cruise ports being “guaranteed” on any voyage is, in simple terms, a myth. Check the small print of your booking and you will see a clause, variously worded, that reads, “Carrier may, for any reason, at any time and without prior notice, cancel, advance, postpone or deviate from any scheduled sailing, port of call, destination, lodging or any activity on or off the vessel, or substitute another vessel or port of call, destination, lodging or activity.”

Pretty clear, you’d say? And it’s the kind of thing that will probably keep Mr Ring-leader out of the courts on this occasion.

Ultimately, it isn’t the kind of thing you should worry about ahead of your next voyage. A cruise line will always do their level best to stick to the schedule as it actually costs them time, money and resources to make a change for any reason, especially as the paperwork involved is a nightmare for all concerned, both afloat and on land.

But it is something you should be aware of, as the safety of the ship is the captain’s prime concern, hence the idea of sailing into a port of call in bad weather is never going to be high on his list of priorities, let alone a port with serious health risks.

Or, as Shakespeare might have (re-)written it if he was accustomed to sea-going holidays: A plague on both your harbours. 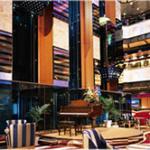