French-flag cruise operator, Ponant Cruises, has announced plans to build a new carbon-neutral sailing ship. The vessel is currently in the concept and design phase, however, the line’s CEO, Harvé Gastinel, and Director of New Builds, Mathieu Petiteau, have shared some early project details.

“We’ve been working with the STX in Saint-Nazaire, France, on developing the future Ponant sailing ship, a vessel inspired by the design and appearance of the company’s original and iconic three-master”, said Petiteau. “This ship will also have a hybrid propulsion system, with engines powered not only by liquified natural gas but by a completely renewable form of energy: wind power with the fitting of a 300 m² sail.”

The vessel will be the fourteenth addition to the Ponant fleet and sail to “the extremes” of French Polynesia and Easter Island. “It will certainly be a small ship, in the 100 to 200 guest range, targeting slow travel with flexible itineraries”, Gastinel explained. “We want the most modern fleet with the best technology”, he added. “It’s a new kind of vessel. It has to be carbon neutral. It has to demonstrate the ability of the company to be at the forefront of sustainable tourism.”

Ponant has already set a benchmark for sustainable cruising. The line has offset 150% of its carbon emissions and is the first to achieve Green Marine Certification. In 2019, Ponant also became the first to abandon heavy fuel oil and switch to Low Sulfur Marine Gas Oil, which saw a 25% reduction in carbon emissions.

Other practices Ponant have employed include:

The line also aims to:

In November 2019, Ponant placed a $332 million order for two new ships to join Le Paul Gauguin in French Polynesia. Ponant acquired Paul Gauguin Cruises in the summer of 2019. However, the pandemic interrupted the sale, and the expansion was eventually abandoned.

The new sailing ship will launch in 2024, with revolutionary plans in place for sustainable cruising from the outset. Petiteau explains, “It’s mainly about optimising the design of the hull and installing more energy-efficient engines and equipment/fittings such as real-time energy consumption calculation tools, energy recuperation systems and low-energy lighting.”

For more information regarding Ponant Cruises, please call our Voyage Consultants on 0800 008 6677. 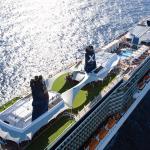