Canada, Falls and Crossing – Montreal to Southampton cruise with Oceania

As you might already be aware, Oceania Cruises recently released its full collection of cruises for 2014/15.  Many of the sailings are already proving incredibly popular with our clients; most notably a special Montreal to Southampton cruise in May 2015.

Sailing on Marina, this transatlantic voyage offers guests the opportunity to explore the city of Montreal – recently referred to as Canada’s “Cultural Capital” – before embarking on a 16 night cruise towards Southampton, calling in at ports including Quebec City and Belfast along the way.

At The Cruise Line, we believe that south eastern region of Canada truly warrants further exploration, and as such, we have put together an EXCLUSIVE package which includes three nights in Montreal, one night in Toronto AND a Niagara Falls excursion.

Please read on for more details…

Following a flight from London Heathrow to Montreal, you will be transferred to the Intercontinental Hotel for a 2 night stay.  During your time in Montreal you will have the opportunity to explore this amazing city at your own leisure – and the only problem you will have is deciding what to do first!  One of the most impressive buildings in Montreal is the Notrea-Dame Basilica.  A striking monument, the Basilica’s Gothic revival architecture is revered throughout the world and boasts an interior that is just as exquisite.

Another attraction in Montreal that should be high on your list is Mount Royal.  Located between the Laurenthians and Appalachinns’ mountains, this three-peaked hill considered one of the top 10 must-see places in the city and is one of the largest greenspaces in Montreal.  Here, you can enjoy paddle-boating, ice-skating, cycling – even tobogganing!  For incredible views, venture to the top of Kondiaronk Belvedere; a semi-circular plaza with a chalet over-looking downtown Montreal.

Our EXCLUSIVE package also includes a trip to Niagara Falls, a Canadian city set on the banks of the world famous Niagara River.  It goes without saying that the main attraction here is Niagara Falls, but we recommend you also take in some of the city’s other attractions, particularly  Skylon Tower.  Constructed in 1964, Skylon Tower is a 774 ft observation station that at its peak includes a revolving restaurant proffering breathtaking views of the Niagara Gorge.

During your time in Niagara, you might also want to visit MarineLand, the Queen Street Arts and Culture District, and the Clifton Hill tourist promenade, which features a Ripley’s Believe It Or Not museum, five haunted houses and four wax museums.

On your last day in Montreal, you can begin to look forward to spending the next 16 nights aboard Oceania Cruises’ luxurious Marina.  Following your afternoon departure from the city’s main port, you will visit more of Canada’s wonderful highlights before sailing across the Atlantic Ocean towards Southampton.  En route to Southampton, Marina will call at some of the UK’s most iconic ports of call, including Belfast and Guernsey’s St Peter Port.

Oceania Marina offers guests a unique ‘country club-casual environment’ whilst delivering luxury and comfort as standard. Onboard you will find the world famous Canyon Ranch Spa Club, Casino, heated swimming pool with 3-whirlpoosl, boutiques and an enrichment centre. It is fair to say one could never be bored on sea days.

Fares start from £5599 per person, based on a deluxe ocean view stateroom*

FARES INCLUDE:  Flights and transfers (where stated), 3 nights in Montreal, 1 night in Toronto, a tour of Niagara Falls, and $400 onboard credit per Stateroom.

TO BOOK or for more information on this Montreal to Southampton cruise with Oceania , please call one of our Cruise Experts on 0800 008 6677.  To view this cruise on our website, please click here. 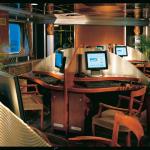