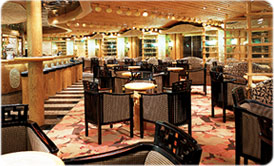 Okay, it sounds glamorous, but would you do it? Seriously, would you take almost four months off from work/retirement/feeding the pigeons to circumnavigate the world by cruise ship?

Could you even take that much time off? As much as we like to think of ourselves as gentlefolk of leisure, there are still various things that would get in the way of us departing T&T Towers for 100-plus days at sea. Things like propping up the economy down at the Bloated Goat, harassing the local council about illegal parking, dropping in for coffee at Harrods and calling the Nine O’Clock News to complain about the government (any government. We don’t discriminate).

So there are definitely duties that would be hard to tear ourselves away from. Of course, several of these would be offset by propping up the economy at the pool bar and dropping in for coffee at the observation lounge. We could also resort to just emailing the council and saving up all our NOCN grumbles until we get back.

That would definitely free us up for the necessary time to set sail on a round-the-world voyage, an example of which flashed across our sun-lounger last week in the form of a 131-day itinerary from Regent Seven Seas Cruises.

Here’s the skinny: with anchors aweigh on January 24, 2020, the Seven Seas Mariner will depart from San Francisco and sally forth for a 66-port jaunt calling at six of the seven continents, concluding with a rather jolly transit of the Panama Canal and various points through Central America.

The Mariner will take in the South Pacific, the Far East, the Bay of Bengal, the Arabian Peninsula, Suez and a big chunk of the Mediterranean, all from the viewpoint of one long sojourn on this peripatetic palace.

It also marks another firm commitment from Regent to the idea of world cruises, which seemed to have all but died out only a few years back. At one point, only Cunard and P&O – with that veritable dowager of the high seas, Canberra – were exponents of the global voyage, but now there are at least 10 different offerings in this long form of cruising.

Crystal, Holland America, Princess, Silversea and Seabourn – in addition to the aforementioned trio – all have extensive sailings ranging from 95 to 152 days. Oceania go as far as a truly humongous voyage round-trip from Miami, Florida. Their ‘Around The World In 180 Days’ aboard Insignia is a mind-blowing jaunt, half a year at sea and including extensive tours of Asia, Africa and South America.

Even newcomers Viking Ocean Cruises have an epic 141-day offering, Miami to London, aboard their Viking Sun departing this December.

So, if everybody is doing it, in cruise line terms, what makes it more appealing than, say, a three or four-week trip?

Well, just to start with, the sheer name-dropping value of the idea is invaluable. “Oh, we’re just off on this year’s World Cruise,” you can tell the neighbours, safe in the knowledge that they will be happy to keep the post from piling up on your doormat (knowing they can have a good snoop around while you’re gone. We know our neighbours do – so we leave out little tidbits for their consumption. You know, fake telegrams from the Queen, letters from MI5, that sort of thing).

Then there’s the sheer delight of popping into the newsagent’s to announce you just need to cancel the papers – for four months. “Just a little vacation,” you coo. “After the troubling business with our Ferrari we’ve earned it this year!”

People are just so much more impressed with the idea of a World Cruise than the typical variety. Even our newsagent has been known to take to the sea these days, and not in a cross-Channel ferry, either. There genuinely is a cruise for everyone in the 21st Century, but anything more than two weeks is still seen as something special.

And the cachet of having that luggage label that proudly proclaims the full 130/140/150-day voyage remains priceless. You can settle in to your cabin cosseted by the fact you won’t have to re-pack your suitcases for months, and you will have plenty of time to find that odd sock that always manages to insert itself into some strange nook or cranny and defy your best efforts at locating it.

In it for the long haul…Princess Cruises’ World Cruise Itinerary

Best of all, the crew treat you like family. When everyone is into that more languid mindset of elevenses, luncheon, afternoon tea and supper, it is far easier to get to know the people around you, and you’ll probably end up making more genuine friends than half a lifetime of living at 23 Railway Cuttings (quick pop quiz – name that comedian!).

The big question for us, of course, is that if we were to sign up for half a year at sea, or even just a more modest 95-day version, would we have enough material to keep regaling you, Dear Reader, with our maritime exploits? And that is the 60,000 dollar question. Not least because it would cost us around $60,000 just to do it!

We’ve tried raising the question with our editor. “Dear Sir, we believe we would be a great asset to you on a round-the-world cruise. Please sign this expenses chit for $60,000, in advance.” That didn’t find much favour, as we found the remains of the note stuck to our desk. With a steak knife.

So, in the absence of being able to entertain you with our own stories of world journeying, how about you tell us about yours? We’ll keep this week’s mailbag (i.e. Comments section) open to all and any thoughts on world cruises. Have you been, and would you even like to go. Answers, please….!