Home Blog P&O Are Doing What?

P&O Are Doing What?

P&O Are Doing WHAT?

It had to happen, of course. After all, zoos now open up the naming of their latest baby – be it giraffe or gerbil – to all and sundry, while sports teams often allow Joe Public to have a say in the naming of new mascots (which is how those for the recent Rio Olympics ended up as Tom and Vinicius. Tom and Jerry would have been more appropriate).

Here’s another. Crayon manufacturer Crayola currently has an open contest to name its latest colour in the blue range, but wisely with a choice of five candidates, from Star Spangled Blue to Bluetiful (and avoiding the cringe-inducing possibilities of Blue Dream, which we were surprised to learn is a form of cannabis, and Song Sung Blue, the sickly Neil Diamond ditty that drives Treadwell to near insanity). We could also add Blue Murder, for when we hear about another naming competition.

But now the dear old Peninsula and Oriental Steam Navigation Company are at it. Their newest ship – which will weigh in at a whopping 180,000 tons, by far the line’s biggest – is due to reach our cruise consciousness in 2020, carrying fully 5,200 passengers and featuring 15 different places to eat, among a vast variety of onboard features.

The latest vessel will also boast, we are told, a “stunning atrium” and “new levels of entertainment,” as well as being “our most environmentally efficient yet.” All well and good, you might think, but P&O Cruises have just decided to put the naming rights out to the whim of the great British public. As Frankie Howerd might have said, “Ooer, Missus.”

Aren’t we only just fresh from the catastrophe of the bizarre naming of that deep-sea research vessel, Boaty McBoatface?

True, this idea was originally ‘floated’ (ho, ho) late last year, but P&O has just announced the details of how the process will work, along with the fact they will have a panel of four judges – including the ineffably elegant Darcey Bussell, CBE – to vet all the suggestions. Even then, you have to believe they are going to have to sift through a hell of a lot of submissions along the ‘McBoatface’ kind of thinking. So why would you even take the merest hint of the possibility of a risk on the most important attribute of your flagship, i.e. its name?

After all, think back just a generation or so and the name Canberra conjures up fond memories of classic cruising, while further back in the line’s genealogy are other great traditional names such as Carthage, Cathay and Himalaya.

Each one of those memorable vessels – spanning the period from 1853 to 1997 – typified the sense of gracious maritime timelessness that enveloped sea travel for more than 100 years and still hints at that noteworthy past today. With that kind of lineage, we can easily imagine new vessels being called Pacifica, Thalassa or Phoenicia.

(We are especially proud of Thalassa, by the way – the Personification of the Sea. The consort of Pontus, a Greek god of the sea, one of the primordial deities. Amazing what you can dredge from ancient history classes 40 years later)

The company similarly revived a classic from their own archives in 1995 with the new Oriana, and also showed admirable gumption in bringing back the Arcadia and Aurora into modern life. When they named their most recent ship Britannia in 2015 it again pointed to a commendable understanding of their own history, despite the hysterical reaction in some quarters of social media that insisted P&O was somehow “stealing” the name from Her Majesty’s Yacht (which was officially retired in 1997).

Yes, the Palace’s little cruiser was also called Britannia, but the name itself predated the royal version by some 119 years as a ship for the General Steam Navigation Company (which became Peninsula and Oriental a few years later). In fact, there were two previous Britannias in the P&O stable, that first one in 1835, and then the first of a series of four in 1887 to mark Queen Victoria’s jubilee. So the Palace really ought to have been asking for permission to name their Britannia in 1954, see!

But we digress. What it shows is that the company had maintained an awfully good understanding of maritime tradition in general and its own nautical history in particular. And now they’re prepared to hand over the reins of responsibility to the folks who dreamt up Boaty McBoatface? To coin a phrase, what could possible go wrong? Ye gods!

Darcey may be a dab hand at the old pas de deux and arabesque, but she is going to need a fine line in tap-dancing to avoid the obvious pitfalls of a boatload of names that are all prefaced Mc or Mac. Some suggestions may even come with a generous helping of porridge. *Shudders*

In fact, cast your mind back to an episode of Black Adder III and the introduction of the character’s Scottish cousin, and you can easily imagine a litany of groan-inducing puns that are likely to be winging their way to Darcey and Co even as we type.

We can see it now – McPorridge of Boatshire, or Bonny Prince MacBoathaven. The possibilities are practically endless. We can feel the need for a gin and tonic coming on. Make that a double…

PS: You can see TV foodie Olly Smith introduce the P&O naming competition – with the chance to be a VIP at the grand naming ceremony – in the video below:

PPS: All official name entries must be submitted by July 31.

OK, you’ve seen our thoughts on the naming possibilities. What crazy names can YOU see being sent in? Give us your wildest ideas below for an unofficial naming contest!

2 Responses to P&O Are Doing What? 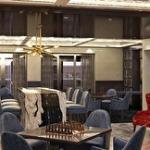