In many ways, 1965 was a watershed year for Britain. Winston Churchill died. The Beatles played their final full UK tour. Mary Quant introduced the mini-skirt. The Magic Roundabout made its debut on TV. And Thomson Holidays was born.

Mini skirts still, of course, exist, albeit usually in fashions that can best be described as “laughable” and “You’re kidding, aren’t you?” The Beatles survive only in the OAP forms of Paul McCartney and Ringo Starr. Churchill has never been replaced, likewise the art-form known as the Magic Roundabout. But Thomson have been an ever-present in the holiday firmament for 52 years.

When it came to package holidays, there were three names you counted on for reliability and good value – Thomas Cook, Clarksons, and Thomson. They were as British and dependable as, well, Churchill and the Magic Roundabout.

The 1970s saw all kinds of business shenanigans in the travel world. Clarksons went down with all hands (stranding some 50,000 tourists overseas. Does that sound familiar? *Cough* Monarch *Cough*). Freddie Laker thrived then nose-dived with Laker Airways and his Skytrain venture, with £32.50 fares from London to New York! And Club 18-30 earned a (largely deserved) reputation as a cross between an all-night rave, a bordello and the world’s largest consumer of alcohol.

Through it all, Thomas Cook and Thomson remained constant, the holiday choice of the masses, and a mass of ever-expanding ideas. Like cruising. Cook’s dabbled with the idea of starting their own line several times, but ultimately got cold feet. Thomson, however, dived straight in back in 1995 after seeing rival Airtours make a success of the business.

Twenty-two years later, the Thomson fleet has changed, updated and modernised, but now comes the biggest change of all. Now, as part of a major corporate switcheroo (where Thomson as the brand name is being replaced by the ghastly European identity, TUI) this too, sadly, will become a thing of the past. Instead, we must welcome Marella Cruises.

Marella Cruises? MARELLA Cruises? Mar-bloody-ella? That’s just Marbella without the ‘b.’ Who comes up with a name from an existing place and just drops one of the letters? You might just as well call it Blackool Cruises. Or Ognor Regis.

Marella isn’t a name, it’s a chocolate spread. Or a children’s illness. Or a fruit. Or a fashion brand. Actually, it IS an Italian women’s clothing and accessory brand, and has been since 1976, for the latest power-dressers in Milan, Rome and Genoa. As a coat, it makes sense. As a cruise ship? What on earth were they thinking/smoking/hallucinating?

It took us 10 seconds to Google it, and it’s the first thing that comes up. Marella Cruises? Is that going to be some kind of floating fashion show? Will they sue for brand theft? Will they know? Will they care? (If there are lawyers involved, you KNOW they are going to care!).

But, even if the Italian couturiers decide not to take an interest, how do you sail around lumbered with that kind of dodgy moniker?

Was that really the best that this corporate monolith could come up with? Did they put all their think tanks and blue-sky thinkers together for weeks on end? Did they run it past a focus group and take copious notes of the reaction? And they STILL came up with Marella?

Okay, let’s take five minutes here and see what we can come up. We’re serious. Put down your knitting, or that cup of tea, or the Telegraph crossword. Take out a pen and piece of paper, and put down five names that you might like to see as a cruise line; a completely new but representative cruise line. A name that has some meaning, some authority, some semblance of relevance.

Here’s what we have:

Hell’s teeth, even Boaty McBoatface Cruises is a better choice in this context. Give us something that even hints at the fact this is a sea-going enterprise, and not a meaningless, antiseptic word that might just get you sued by some foreign fashion house.

The official explanation for Marella, in case you were wondering, is that it is a Celtic word meaning ‘shining sea.’ Um, in case you hadn’t noticed, Celtic is only spoken in small parts of the British Isles and is utterly irrelevant to the majority. According to the website BabyNames, it is also a variant for Muriel.

Muriel Cruises? Somehow we don’t think that would have got past the TUI corporate censors. But that’s effectively what they’ve got. And, if it’s a Celtic name, does that mean the crew will need to dress in kilts and wave claymores?

Why Celtic? Why ‘shining sea’ (surely it’s too close to Shining Path)? Why not something more classic, like ‘Inis’, which is Gaelic for Island, or ‘the land surrounded by sea,’ which would be far more representative. It just doesn’t make any sense, any which way you slice it. Shining Sea Cruises would sound horribly hokey in English, so why try to disguise it by putting it into another language. And what’s wrong with good old English anyway?

You see, we just have more questions than answers.

TUI, over to you…

Do you have a better name for a cruise line than Marella? What would you rather see Thomson renamed as? Put your own thoughts down in the Comment section below.

2 Responses to Name That Line! 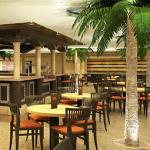