Cruising for Celebrities and Royalty

Following the news that Brad Pitt and Angelina Jolie Editor are considering getting married aboard the Hebridean Island Princess, World of Cruising magazine editor Simon Veness looks at the long-standing relationship between celebrities and cruising.

It shouldn’t really be any surprise that Brad Pitt and Angelina Jolie have made enquiries about staging their celebrity wedding aboard the boutique cruise confines of the delightful little Hebridean Princess.

The 49-passenger vessel of Hebridean Island Cruises has, of course, already proved most accommodating to the ultimate in ‘celebrity’ appearances, having twice been the royal cruise vessel of Her Majesty the Queen herself, in 2006 and 2010.

But it underlines the enduring appeal of a sea-going sojourn for the rich and famous in a star-spangled list that goes back almost 150 years.

So, if ‘Brangelina’ do officially become a married item among the Highlands and islands – as would certainly be an excellent and distinguished choice – they will only be continuing a trend that has included royalty of all kinds, famous statesmen, politicians, writers and, certainly, Hollywood stars.

In 1867, Mark Twain set sail on an epic sea-going adventure from New York that took him to the Holy Land and back and confirmed him as an international writing celebrity as he penned his famous story of The Innocents Abroad and, later, The Tramp Abroad.

Back in the 19th century, there wasn’t exactly a lot of choice in travelling those kinds of distances, but Twain certainly gave maritime journeys an enormous boost – one that was to be set in stone a few decades later.

As ships became more reliable – and glamorous – in the early 20th century, it was only natural that they should become the favourite ‘parade ground’ of the notables and celebrities of the time. People such as Franklin D Roosevelt (on Cunard’s Mauretania), the Vanderbilts (on White Star’s Olympic) and the “Brad and Angelina” of the 1920s, Mary Pickford and Douglas Fairbanks (also on Olympic) all gave cruising the ultimate appeal.

During her hey-day in the late 1940s and 50s, the Queen Mary’s guest list read like a Who’s Who of the glitterati of their age, including the likes of Elizabeth Taylor, Clark Gable, Greta Garbo and the Duke and Duchess of Windsor (King Edward VII and Wallis Simpson), as well as Queen Elizabeth the Queen Mother, Sir Winston Churchill and President Dwight Eisenhower.

It was a period when nothing matched the glamour and excitement of a North Atlantic crossing, and virtually anyone who was anyone travelled between New York and Europe with the paparazzi of the day in tow.

To a large extent, the jet engine and the ability to cross the Atlantic in hours rather than days put paid to a lot of the great liners of the 1950s and 60s, but the appeal of travelling in the style of yesteryear remains.

Indeed, although many celebrities preferred to be photographed at airports rather than dockside, there were still those who found it more distinctive – and more fun – to travel by sea and enjoy the classic style of te likes of the QE2, SS France and the Italian Line’s Michelangelo.

The great Cunarder continued to be bastion of all things quality-conscious on her regular route between New York and Southampton well into the 1990s, and her clientele included such modern-day luminaries as Sir Terry Wogan, Melvyn Bragg, Jane Seymour, David Frost and – with a nod to past royal times – the Duchess of York.

The modern royal family weren’t left out, either, as Her Majesty the Queen was called on to name QE2’s de facto replacement Queen Mary 2 in 2004 and we recently saw the Duchess of Cambridge, Kate Middleton, performing the inaugural honours for Princess Cruises’ new vessel, Royal Princess.

And the Hollywood ties have remained strong, even if ships are no longer packed with A-list stars playing to the port-side galleries. Enduring Italian legend Sophia Loren is godmother of the entire MSC Cruises fleet while Americans Andie McDowell and Sharon Stone each christened new riverboats for Uniworld and AmaWaterways respectively in March.

It brings the story of glamour, celebrities and cruise ships right up to date and ensures that anyone cruising today continues to sail in a path that has long been a pastime of the rich and famous.

And, if ‘Brangelina’ do end up tying the knot aboard the cosy little Hebridean Princess, well, it will just be the continuation of a time-honoured Hollywood principle – if you’ve got it, flaunt it; on a cruise ship! 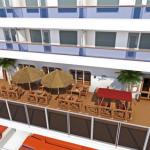