Dare You Cross This Line!

Dare You Cross This Line!

Our friends across the pond were in magnificent form this week, not only celebrating that dear old tradition called Fourth of July but also wondering if they can also declare independence from the current oaf who inveigled his way into the White House.

So far, he seems to have done everything except declare himself King, which is the ultimate irony considering the efforts the former colony went to in order to divest itself from the chains of monarchy some 241 years ago. But we digress (already).

No, what got us thinking was seeing all the cruise lines displaying the Star Spangled Banner on their social media accounts to mark the date on Tuesday. From the European-owned and styled Silversea and Uniworld, to the likes of Cunard, Princess Cruises and all-American Carnival Corporation, they were all in best red-white-and-blue mode for the day.

Fireworks, barbecue and parades were all on offer. In fact, you couldn’t get away from July Fourth memes wherever you looked. Our favourite – “4th of July: The Day Will Smith Saved Us From Aliens!”

It set us to wondering about some of the best celebrations at sea we’ve enjoyed over the years, as you can pretty much guarantee that every cruise ship these days makes an effort to highlight just about every landmark and festivity you can think of, from St Patrick’s Day, Cinco de Mayo and Mardi Gras to the Venice Carnival, Chinese New Year and Festoon A Gnome With Bacon Rind Day.

Okay, so we made the last one up, but we will always argue it should have been A Thing back in the day when most of our neighbours thought it was de rigueur to have a cheap plastic dwarf stuck in their shrubbery somewhere. We’d rather have Jack The Ripper on display in our garden than some bright-coloured, mis-shapen troll. But we digress (again).

Pretty much we have seen them all – Martini Day, Donut Day, Chicken Day and World Porridge Day (yes, it does exist; we looked it up) – and they always add a certain flair to the maritime ambience. Seasonal variations like Easter, Christmas and New Year are great times to be at sea, as every ship usually makes a major effort to titivate for the occasion, and many now lay on lavish festivities, which is very much how the liners of yesteryear catered for their passengers.

We do tend to be land-based for Christmas – family traditions, you see – but New Year is certainly a calendar marker we are happy to celebrate in nautical mode, and we have enjoyed many a pyrotechnic extravaganza over the years in exotic ports of call. We haven’t yet made it to Sydney for Australia’s premier December 31st hullabaloo, but we do have our eyes on Fred. Olsen’s selection this year, with their vessels offering the chance to see in 2018 in such far-flung outposts as Funchal (Madeira), Antigua, Trondheim (Norway), the Indian Ocean and, of course, Sydney.

One of the most overlooked sea-going celebrations, though, can occur on any day of the year, provided you are in the right vicinity. And, if you’re not familiar with the Crossing The Line ceremony, then we suggest you consult your nearest cruise agent for all the possibilities this year.

What is it, do we hear you ask? Well, if you are a Son (or Daughter) of Neptune, you will already know. If you are a pollywog, you probably won’t.

It’s a long-time tradition in the Navy, and was initiated on cruise ships at some stage in the 1930s. It usually involves getting wet, and can also include raw eggs, flour and buckets of indeterminate green ooze (or “pancake batter with algae,” as Treadwell calls it). It doesn’t matter whether you’re going north or south, if you’ve never been that way before, the effect is the same.

Give up? It is, of course, any sailing that crosses the Equator (the ‘line’, you see), as all pollywogs must appear before King Neptune (usually an experienced member of the crew), who may also be assisted by Davy Jones and her highness Amphitrite, as well as various other assorted maritime ‘dignitaries’, if the crew is feeling frisky.

Most ‘inductions’ take place by the pool, in a chair that typically tips backwards when the hapless pollywog least expects it, after being coated by various amounts of slime and/or eggs. There are numerous variations, according to how evil the crew may be that day and it is also great fun for all concerned (especially those who have Crossed The Line before and get to watch!). It’s akin to the lines of German folk watching drunken tourists in Munich flail and flounder on those demonic slides they set up during Oktoberfest.

There are roughly thirty cruises a year that cross the Equator in one direction or the other, with each of Holland America, Princess, Celebrity and Seabourn (among several others) featuring this unique opportunity.

So, if you have already done Christmas, New Year and International Gnome Day at sea, then Crossing The Line is definitely one to consider. And, if you’ve done it already, what could be better than watching some hapless landlubber get slimed in the name of entertainment? Go on – you know you want to!

Have you already done a Crossing The Line ceremony? If so, tell us all about it. Or just tell us your favourite celebration at sea. There are certainly plenty to choose from. 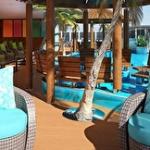