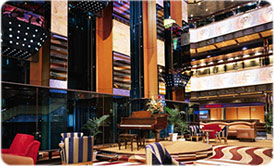 We’re in the Bahamas this week. Yes, we know, it’s a dirty rotten job, but someone simply has to do it. And, this week, it’s us. So let’s not have any rumblings and complaints of “Not fair,” etc. We’ve survived two weeks of winter, so we’re overdue for a break.

Anyway, here we are, and all perfectly splendid it is, too. We were asked by our editor (well, when we say ‘asked,’ we actually mean we sat outside his door and whined about being cold and pasty from the lack of sunshine, and eventually he told us to “sod off somewhere warm”) to investigate the charms of Florida’s favourite cruise playground.

More ships visit this part of the world than anywhere else from November to April. On a good day (from the islands’ revenue point of view), there can be seven ships in the port of Nassau, or merely three to four on average. Nearly all of them come from Florida’s five cruise ports.

That means you are never much more than an hour’s drive in the Sunshine State from the nearest ship that will take you somewhere even sunnier. And blissful. And picture-postcard pretty.

Those of you old enough to remember the classic James Bond film Thunderball will know what we mean. You know that sequence when Bond is touring the Bahamas by helicopter looking for the missing V-Bomber that is part of Emilio Largo’s evil plan to take over the world? Those impossibly crystal-clear waters? Well, they’re real and they’re right here.

So, while the cruise ship tourists pour into Nassau and fill up every shopping nook and cranny, what you need to do is head to one of the beaches or, better still, charter a boat and make for one of the smaller islands in the vicinity where the crowds simply melt away.

Any of Blue Lagoon Island (otherwise known as Salt Cay), Rose Island, Pearl Island or Ship Channel Cay will do the trick, with acres of beach and those oh-so-clear waters to make you feel like Double-07 himself.

The next best thing is to take an island tour with one of the many taxi drivers who throng the port. Seriously. Not only do they know their way around better than anyone else, they are a non-stop source of local knowledge and – like our man Dwane – are arguably the best advertisement for visiting the Bahamas.

Of course, what you really need to do is stay here.Once 5pm rolls around and the cruise ships depart, you’ll feel like you have the place to yourself, and all those tourist traps that feel suitably ghastly with 20,000 passengers in town suddenly become the paradise island which it actually is. Paradise Island, that is.

Yes, yes, the main island is New Providence, but the dinky little bit at the top is wonderfully separate and smothered with eye-catching resorts, like the monumental Atlantis, with every mod con known to man, and probably several that aren’t. Also here is the blissful One & Only Beach Club, along with several miles of eye-achingly white sands that seemingly disappear to the far horizon of forever.

Back on New Providence, for something more traditional, the British Colonial Hilton should definitely appeal to Bond fans. After all, it also appeared in Thunderball (as well as the knock-off remake Never Say Never Again). Or you can try the more boutique style of the Graycliff Hotel, which also has that feeling of Bond-esque exclusivity.

Even better, you can do what we did and hop on a short flight from Nassau to the island of Eleuthera, where you can really get away from it all. If there is one island that best sums up the gorgeous tranquility and sumptuous style of the Bahamas, it is Eleuthera.

The Cove Eleuthera Resort in the Bahamas

With a population of barely 12,000, plus a few hundred (lucky) tourists, this is where you want to come when you need to un-plug, de-stress, kick back and chill out. Completely. Not only does it contain some wonderfully distinctive resorts – The Cove and Pineapple Fields garner all kinds of awards for ‘best of’ in the Caribbean – it has that recherché celebrity style that means you could bump into Mariah Carey, Lenny Kravitz or Catherine Zeta Jones at any time. Only you might not recognise them, because they’re totally chilled, too.

If you do nothing else, head for lunch or dinner at the eclectic Tippy’s, the beachfront restaurant for Pineapple Fields. It may look like a rickety shack, but the food and drinks are first class, and that relaxed-but-stylish ambience hits 11 on a 10 scale.

You can get more reclusive still. Take the ferry from Eleuthera to even-smaller Harbour Island (population: 1,762), with its classic British Colonial architecture and pink-sand beaches, and you practically fall off the map.

Here, at more-exclusive-than-you-can-even-imagine resorts like The Dunmore and Rock House, there is an air of serenity that threatens to go beyond the merely horizontal into a whole new plane of relaxation.

The food is exquisite, the amenities are impeccable, and the vibe is so utterly idyllic you could be forgiven for thinking the world has stopped and you are caught in some kind of holiday limbo, set adrift in a sapphire-blue ocean of flawlessness.

Even the activities are insouciance personified. There is kayaking, and paddle-boarding, and fishing and cycling. The seas are calm and the roads are flatter than the average billiard table, hence the effort involved is barely above minimal.

The friendliness of the locals, from Nassau to Harbour Island, has to be experienced to be believed and, oh, did we mention the colour of the sea? It’s so blue that even the sky can’t compete.

It’s the kind of place that makes you think, ‘If we sold everything we have, cashed in our pension fund early and forgot we have grand-kids, could we live here?’

So, yes, we kind of like this assignment. We can heartily recommend everything about it. Especially as we know, back in West Sussex, the wind will be howling along the beaches, the rain will be practically coming in sideways, the temperature will be suitable only for polar bears, and the colour will be unendingly grey.

Looking across to Paradise Island in the Bahamas