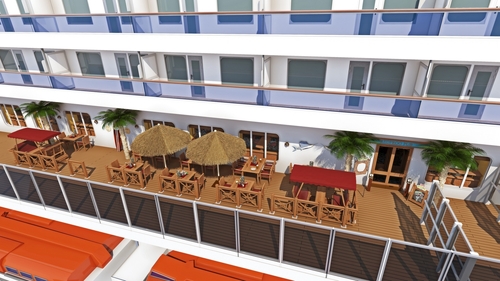 3 great ports to explore in Asia with SeaDream Yacht Club

In autumn 2013 and spring 2014 SeaDream Yacht Club will be offering a collection of voyages that take in the very best of Asia.  Sailing on their 110-capacity luxury yacht SeaDream II, the all-inclusive line will be visiting some of the region’s most famous ports, towns and cities as part of their ‘Asian Discoveries’ collection.

As SeaDream Yacht Club pride themselves on visiting smaller ports of call that are inaccessible to larger vessels, we have handpicked three stops on their upcoming Asia cruise schedule that you definitely won’t want to miss.

Situated off the coast of Thailand’s southern mainland, The Similan Islands is a cluster of nine islands in the Andaman Sea famed for their beautiful white sand beaches, windswept forestry, and startlingly unusual rock formations.

Awarded National Marine Park status in 1982, the archipelago is heavily protected by the Park Authority and is claimed as a national treasure. Such is their beauty and popularity, the Princess of Thailand regularly visits the Islands and even has her own holiday home on the fourth island, Koh Miang.

Those who enjoy snorkeling and diving will be delighted to know that The Similan Islands are claimed to be one of Ten Best Dive Sites in the world due to the incredible 5000-year old coral reef and the rich diversity of marine life that inhabits the islands’ crystal clear waters.

The capital of Central Java, Semarang is a thriving city with a rich history that can be traced back to the 9th century.  A rare stop for cruise ships due to the port’s lack of  a deep-water harbour, it’s not a “pretty” city in the classical sense but Semarang certainly has its own charm and is a city that warrants further exploration, either on foot or by shore excursion.

Home to some of the most incredible monuments in Asia, it is recommended that those visiting Semarang with SeaDream Yacht Club take the time to explore the ‘old town’ region of the city.  This enchanting district offers a glorious myriad of ancient buildings left behind by wealthy Dutch merchants who came from the Netherlands when the region was colonised in the early 17th century.

If visiting Semarang with on a cruise of Asia with SeaDream Yacht Club, then make sure you book onto their tour of the Borobudur, a historic site that is claimed to be the centre of Javanese Buddhism.  A UNESCO World Heritage Site, the Borobudur is the largest Buddhist monument in the world and its construction  out-lasted five generations of central Java’s population before finally being completed in 856 AD.

The tour also includes a drive through the heart of Java, along with a stop at a Javanese coffee shop.

Ha Long Bay is a UNESCO World Heritage Site situated in the north east of Vietnam.   Comprised of 1,969 islands and divided into four fishing villages, it is considered one of the most beautiful bays in the world.  Increasingly popular with tourists, Ha Long Bay is renowned for it’s remarkable landscape, with over 3000 limestone islets piercing through the deep blue waters like foliage covered mini-mountains.

One of the main attractions for those visiting Ha Long Bay is the opportunity to enjoy a short cruise around the archipelago on a “junk boat”.  A traditional Chinese sailing vessel, these slow-moving, distinctive boats are a great way of seeing some of bay’s more isolated islands.

If stopping in Ha Long Bay with SeaDream, we’d highly recommend that you take advantage of their own junk boat shore excursion which also includes a tour of the Long Tien Pagoda, which houses many of Ha Long City’s most famous statues and artifacts.

Fans of the BBC show Top Gear will instantly recognise Ha Long Bay from their Vietnam special which originally aired in December 2008.

If you would like to find out more about SeaDream Yacht Club’s Asian Discoveries itineraries, please call one of our Cruise Experts on 0800 008 6677. Alternatively, you can browse the 2013/14 schedule here.