Home Blog Cocktails: The Good, The Bad & The Ugly

Cocktails: The Good, The Bad & The Ugly

What’s in a cocktail? We ask because, it seems, just about anything now goes in to the world of mixed drinks aboard the cruise lines. The competition to be bolder, brighter and more colourful is apparently all the rage.

Take Sex On The Beach. The drink, darlings, not the questionable gymnastics. It is basically all the vulgar things a good concoction should not be. A so-called staple of most bars around the world (and, especially, those on cruise ships), it is both violently neon and disgustingly sweet in nature. Cranberry juice and peach schnapps should only go together in cheap nightclubs, and should never see the light of day on any self-respecting ship.

Likewise the sickly Pina Colada. It’s a candy drink for those who still need sugar in their tea and coffee, and it should certainly be banned from any vessel on the high seas.

But they are certainly not the only culprits on the maritime drinks menu of the world these days. Our bar companions on a recent little Caribbean jaunt were fixated on something called a Fuzzy Leprechaun – apparently a spin-off of an equally ghastly-sounding libation called the Fuzzy Navel – that was designed for St Patrick’s Day, and would most assuredly have poor Saint Paddy in a complete spin.

This particular leprechaun was, of course, green, thanks to a mix of blue curacao and that blasted peach schnapps, plus orange and pineapple juice, and a measure of vodka. What a waste of perfectly good vodka was our only thought, while the sugar content was enough to turn us diabetic simply by being at the same bar.

So, why this mania to be ‘big and bold,’ with cocktails? What happened to the genuine thoroughbreds of the mixed drink world? You know, an Old Fashioned, a Manhattan or a Mint Julep. We could even stretch to a Mojito, Whiskey Sour or, if we’re feeling frisky, a Margarita (which, with the right tequila, is definitely a contender to raise a sombrero or two).

Tenny will often go for a classic vodka martini – says it brings out the 007 in him. These days he’s more Basildon Bond than James Bond, but it does seem to amuse him. And it almost always gets a knowing nod from the barman, an acknowledgement of proper drinking sophistication.

It set us thinking about the kind of cocktails that are most befitting of the five-star cruise style, the gold standard for drinking pleasure. Or, if you prefer, the good, the bad and the ugly of alcoholic mixes.

Under the former category, we’d have to list all the aforementioned classics, simply because they have stood the test of time and are the ‘any time, any place, anywhere’ of the drinks world, as the Martini advertisers of yesteryear might have put it.

You simply can’t go wrong with a Manhattan or Martini; they’re elegant, tasteful and timeless. They even have their own glasses, for heaven’s sake. How much more classic can you be?

We would also stretch to a number of modern varieties of Martini, as we’re certainly not against experimenting with our adult libations. Cruising with Celebrity is definitely a pleasure when you visit their Martini Bar, which offered – at a rough count – 22 different varieties of Tenny’s favourite blend. It was hard to be sure of the exact number as the menu tended to shape-shift just a tad after a few samples, which included a Martini Flight with six signature variations, but the Decadence Express Martini (basically an alcoholic espresso in a glass) was pronounced “sheerlydeliteful,” or some such phrase.

Our most recent voyaging with Princess Cruises produced the best Mojito we’ve had in a long time, a drink that truly pays homage to its 16th century Cuban roots, while Oceania Cruises introduced us to an excellent Long Island Iced Tea, that 1920s highlight with its distinctly dangerous spirit content.

One other classic worthy of the ‘Good’ category is the Bloody Mary, or, in the case of Crystal Cruises, the Bombay Bloody Bull. This latter, we were told by our eager barman, “contains all four food groups in a glass.” We weren’t sure he had quite grasped the concept of ‘food groups’ terribly well, but the addition of beef bouillon, celery salt and a dash of horseradish certainly took the drink from staple territory to truly inspired. After two of those, there was no need for lunch. Just a long nap on the prom.

If those are The Good, in our book, The Bad would have to start with, sorry to say, the Cosmopolitan. As enjoyable a drink as this is, its potential for over-imbibing is both legendary and potentially catastrophic. The first one always goes down way too quickly, to be followed by a second and, if one’s not careful, a fourth (missing out the third completely). A drink with the capacity to taste like adult Koolaid is never a good idea, and the effects are equally bad for all concerned.

Likewise the Zombie, a concoction of such utter hangover-inducing torment it should be banished from cocktail lists far and wide. A friend of Tenny’s once made it his ambition to spend a whole evening drinking nothing but Zombies in London’s Covent Garden. He didn’t so much miss his train home as miss the whole bally station. Most definitely his Waterloo.

Finally, the downright ugly should need no further introduction. Names such as the appallingly sweet Alabama Slammer, Flaming Lamborghini, Strawberry Shortcake and Loaded Pistol should never be uttered in public, let alone consigned to a highball glass. We’re sure there must be a Sickly Silly Arse somewhere, too, but we’re certainly not going looking for it.

And as for the Harvey Wallbanger, that 1970s nightmare was largely a marketing gimmick by a clever Galliano salesman, proof positive that there are some liqueur bottles which should stay permanently corked.

Fuzzy Navel? We’d rather have a root canal. Without anesthetic. Now, pass the Bombay Sapphire…. 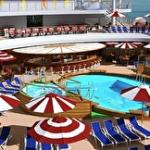